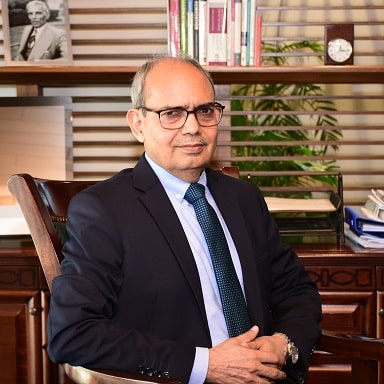 Arif started his professional career from Fauji Fertilizer Co (FFC) where he initially worked as Process Engineer in the Ammonia, Urea and Utilities plants. Later on he worked as Process Engineering In-charge, Operations Engineer-Ammonia and Ammonia DBN Commissioning Engineer. In mid-1994, his services were transferred to FJFC (now FFBL) project team. He worked at FJFC for about 3 years and was a part of the multidisciplinary team that developed the FJFC Project from inception to firm order placement. He led the engineering and improvement of the Ammonia Plant. For that project he remained in USA for about a year as Ammonia Plant Lead.

In 1996, he joined ICI Pakistan’s PTA Business, which was the first and is still the only PTA plant in Pakistan with new technology. He worked as the commissioning leader for the most complex, Oxidation Plant. Later on he led all the remaining sections of the PTA plant (Purification and Utilities) and took over as the first local Production Manager for the PTA Business in 2001. He also worked as Technical Services & DBN Manager and was appointed as Site Operations Manager in 2005, where he was responsible for Operations, Maintenance, Inspection and Materials Management.

In 2007 he joined the Fatima Group as Project Director and led the USD 750 Million Project from ground breaking till its commissioning. This was a green field project comprising of Ammonia, Urea, NP, CAN, Nitric Acid, Utilities and related facilities. One of the salient features of the job was that it was a self-managed EPC Project. Arif was engaged with dozens of international contractors directly and completed the project successfully in 2011. After the commissioning of the project Arif was appointed its Director Operations. In that role he brought the site to its full potential by a series of revamps that included the plants and organizational and systems improvement. As a result the production increased from 0.8 to 1,475 Million tons per year and the bottom line improved from -PKR 2.0 Billion to +10 Billion.

In July 2016 he was appointed Chief Manufacturing Officer, based at the Head Office in Lahore with responsibility for all aspects of manufacturing for the Fatima Group’s three Fertilizer Manufacturing facilities, Fatima Fertilizers, Sadiqabad; Pak Arab Fertilizer Company, Multan and Fatima Fertilizers, Lahore (Ex Dawood Hercules). He has responsibility for Operations, Costs, Budgets and People aspects for all Fertilizers. In addition he is also responsible for the Supply Chain Function for the entire group where he controls the budget of about USD 200 Million per year, growth, sustainability and strategy of the FG; Fertilizer Business.

He has distinguished career of over 26 years in Pakistan Army, during which he served on various staff & Command appointments. In staff duties he has performed as Grade-3 (Int/Ops) of Independent Armour bridge Group, Grade-2 (Ops) in Armour Division, Grade-1 (Coord) JSHQ and Grade-1 (Trg) in a Corps Headquarters. He has commanded Pakistan Rangers Wing (Sind) deployed at border area of Thar desert and has an honor to command his own parent Regt 28 Cavalry (Hunters). Officer has served as Military observer in United Nation Mission in Georgia.

Before joining FML, Lt. Col (R) Mubashar Adnan Dar was working with Raviana Pakistan Pvt Limited as Consultant where he remained engaged with foreign origin companies for the period of 2xyears.

He was graduated from University of Engineering & Technology – Lahore in the discipline of Mechanical Engineering and has been serving Fauji Group since then.

Earlier, he served as COO at Fauji Foods – a dairy company famous with its brand ‘Nurpur’. He had played a key role in the transformation project, while re-positioning its products, launching new brands and sales increase to multifold.